Burundi celebrated on Tuesday, October 13, 2020, the 59th anniversary of the assassination of the Hero of national Independence, Prince Louis Rwagasore. Memorial ceremonies were held across the country. 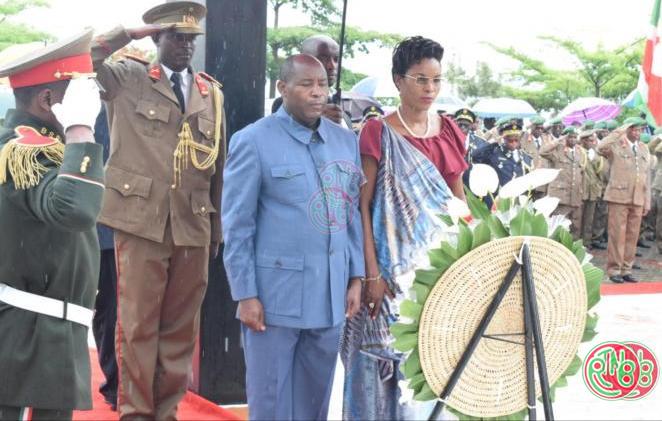 In the town hall of Bujumbura, the ceremonies began with a mass in his memory at the parish of Saint Michel of Bujumbura and were enhanced by the presence of the Head of State His Excellency Mr. Evariste Ndayishimiye in the company of his spouse and other senior Authorities of the country. According to Monsignor Gervais Banshimiyubusa, Archbishop of Bujumbura, only courageous and free-spirited men can save the country, like Prince Louis Rwagasore, Hero of the Independence of Burundi.

In his homily, Monsignor Gervais Banshimiyubusa indicated that if we carefully observe the countries of the subregion and the neighborhood, people share the same challenges. According to the Archbishop of Bujumbura, there are no longer brave and free-spirited men capable of doing good, of speaking the truth and capable of taking responsibility for it, to avoid dramatic situations. Such people are very numerous, underlined Monsignor Gervais Banshimiyubusa.

Based on the gospel of Luke 11: 37-41, the Archbishop of Bujumbura demonstrated that many people seek to be like others and to do as others do, even if the people they want to take for model are doing or living a lie. For Monsignor Gervais Banshimiyubusa, this day recalls the freedom and courage that characterized Prince Louis Rwagasore, adding that a country that does not have courageous and free-spirited men, is deprived of lasting peace, which affects its population which consequently is doomed to live in uncertainty.

He explained that Prince Louis Rwagasore, during his lifetime, did not want to behave like the other “Ganwa”. He was characterized by humility while being strong of spirit. To illustrate his remarks, Monsignor Gervais Banshimiyubusa recalled that Prince Louis Rwagasore was able to reorganize his party (UPRONA), starting from the principle of peace and unity as the foundation of this party.

According to the Archbishop of Bujumbura, Prince Louis Rwagasore knew that in order to get rid of the colonial yoke, the burundians had to stand up as one man to claim Inde-pendence of Burundi. As Burundi celebrated the 59th anniversary of the As-sassination of the Hero of Independence of Burundi, Monsignor Gervais Banshimiyubusa asked the faithful and the Burundian people in general to adopt the spirit of the Hero of Independence by restoring the image of Burundi.

He seized the opportunity to urge the faithful to pray for Burundi so that it will always have valiant men, able to help burundians to consolidate the indepen-dence of Burundi, an independence which cost the life of Prince Louis Rwagasore. He also urged the faithful to avoid wickedness, renounce hypocrisy, and walk accor-ding to the word of God in order to attract divine bles-sings. Finally, the Archbishop of Bujumbura asked the faithful not to seek the admiration of the people or their own interests, but rather to seek the general interest as Je-sus Christ did, who sought only to please God.

Then came the moment for the laying of wreaths of flowers on his mausoleum, starting with the Presidential Couple, then the laying of a wreath of flowers on the tomb of the two daughters of the Hero of Independence by two daughters of the Head of State. Thirdly, it was the biological family who laid the wreath of flowers on the tomb of Prince Louis Rwagasore, followed by Repre-sentatives of the Diplomatic and Consular Corps accredi-ted in Burundi as well as Representatives of political par-ties approved in Burundi and the Association "Fraternité Ishaka ”.