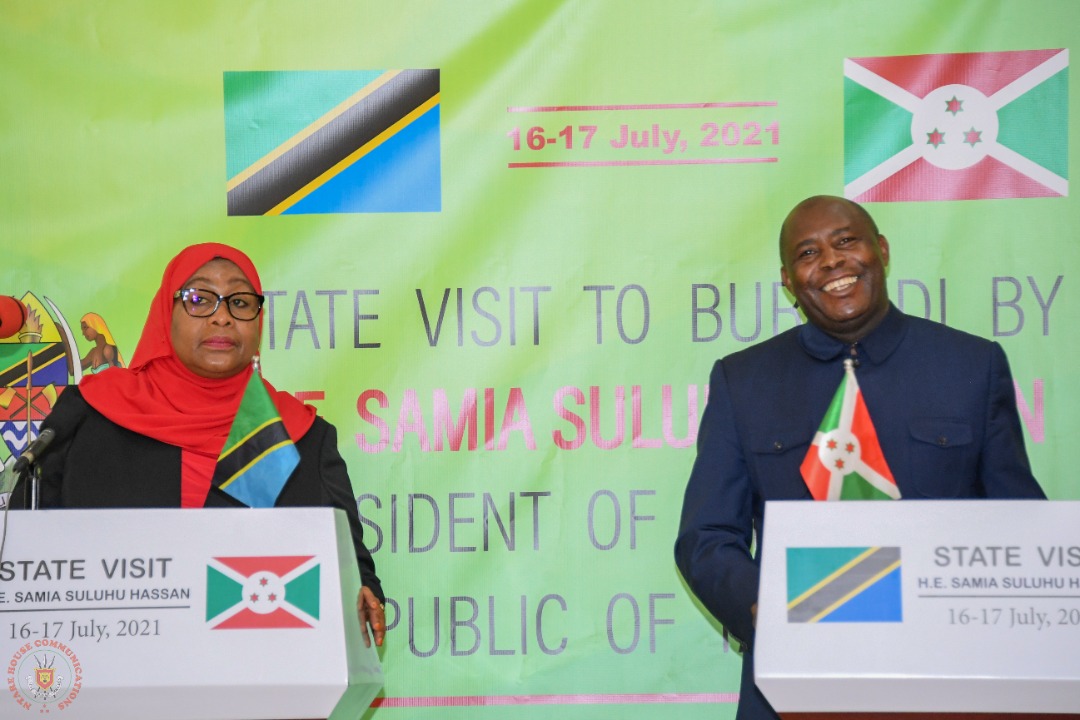 On her arrival at Melchior NDADAYE International Airport, she was warmly welcomed by the Vice-President of the Republic, His Excellency Prosper BAZOMBANZA and was then taken to the Ntare Rushatsi Palace where she met her Burundian counterpart, His Excellency the President Evariste NDAYISHIMIYE for a dialogue which was followed by bilateral talks and the signing of eight bilateral cooperation memoranda of understanding:

As stated in the joint communiqué, during their talks, His Excellency President Samia Suluhu Hassan recognized great achievements made by His Excellency President Evariste NDAYISHIMIYE to consolidate peace, stability and self-confidence in the Republic of Burundi and commended his tireless efforts in favor of economic recovery, national reconciliation, the promotion of the rule of law, democracy and good governance in the country.

His Excellency Evariste NDAYISHIMIYE, President of the Republic of Burundi, meanwhile expressed his gratitude to the United Republic of Tanzania for having welcomed Burundian refugees from 1972 until today and for the unfailing solidarity that they showed as a witness over the years. He reiterated his thanks to this eastern neighbor country for the major role played in the conclusion of the Arusha Peace and Reconciliation Agreements and in the entire reconciliation process in Burundi.

In addition, the two Heads of State welcomed the withdrawal of Burundi from the agenda of the United Nations Security Council and the Peace and Security Council of the African Union, as well as the cancellation of sanctions against Burundi by other partners. They therefore called on Burundi's partners who have not yet cancelled the remaining sanctions imposed in 2015 to do so immediately in order to revive the socio-economic development of Burundi.

During a press briefing organized on this occasion, the President of the United Republic of Tanzania made it clear that his visit to Burundi is part of the framework of strengthening relations of friendship and cooperation between Burundi and Tanzania. In addition, she stressed that she made the trip to express her gratitude to the Burundian people for the support and solidarity shown to their Tanzanian neighbors during the times of hardship following the death of His Excellency President John Pombe Magufuli.

Her Excellency Samia Suluhu Hassan also let it be known that she came to personally congratulate the Burundians on the 59th anniversary of Burundi's Independence since she was unable to join them at the time of the celebration, on July 1st, 2021.

During her state visit to Burundi, His Excellency the President of the United Republic of Tanzania plans to meet the Tanzanian community living in Burundi and participate in the Burundi-Tanzania Business Forum, among other activities.