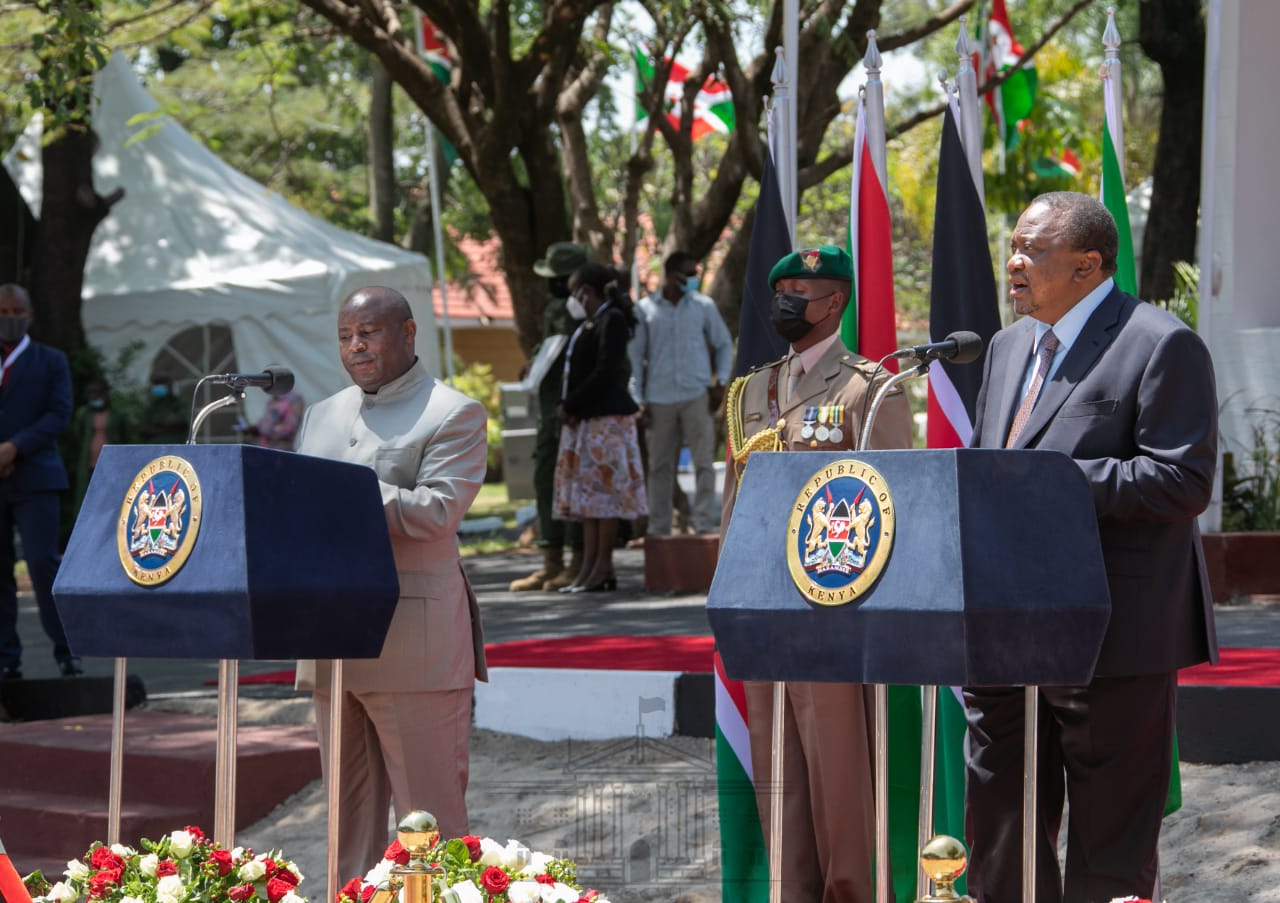 On Monday, May 31, 2021, at the invitation of his Counterpart from Kenya, the President of the Republic of Burundi Her Excellency Evariste Ndayishimiye, accompanied by the First Lady His Excellency Angeline Ndayishimiye and several Senior Officials of the Burundian State, began a visit of a two day state visit in the Republic of Kenya where he has participated to the national “Madaraka Day” celebrations scheduled for June 1, 2021.

After being received with military honors at the State Lodge of Kisumu by his Kenyan counterpart His Excellency Uhuru Kenyatta accompanied by his Spouse, the first day was marked by an important meeting between the members of the official delegations of the two countries at the end of which, were concluded and signed seven new cooperation agreements in several fields.

During a jointly animated press briefing, the two Heads of State affirmed that "the signing of these new agreements reflects their firm commitment to revitalize and develop political, diplomatic and commercial relations between Burundi and Kenya".

H.E President Evariste Ndayishimiye expressed his gratitude to H.E President Uhuru Kenyatta and the Kenyan people for the role played in the past by Kenya in stabilizing Burundi through international peacekeeping efforts and trade facilitation: “We value the ties between our two countries both in investment and in trade. We are grateful for the role played by Kenya in maintaining peace in Burundi and facilitating trade through the port of Mombasa, and the Kenyan investors already working in Burundi”.

Indeed, the two Statesmen expressed their common desire to strengthen the fraternal and historical ties that unite the Burundian and Kenyan peoples, and as a sign of this brotherhood, the President of Kenya offered a herd of cows as a gift to his Burundian counterpart, a culturally strong symbol.

H.E President Evariste Ndayishimiye and his Kenyan counterpart also declared that they would continue to work together to advance the African agenda on the world stage, and reiterated their country's commitment to the progress of the African Community from the East.

“On international cooperation, we reiterated our commitment to continue to work closely together at the United Nations level, with a view to advancing the Common African Agenda for Integration and Sustainable Development”, President Kenyatta said.

As part of efforts to strengthen bilateral relations between Burundi and Kenya, the two leaders agreed to review the 2018 agreement of the Permanent Joint Cooperation Commission with a view to ensuring the swift implementation of the agreed agreements.

On another hand, the discussions also placed the sharing of expertise at the center of the new course taken by Burundian-Kenyan relations and it is in this context that the two Heads of State inaugurated and visited together the shipyard of Kisumu; which will undoubtedly bring its know-how in the promotion of maritime transport in Burundi.

At the same time, the First Ladies of Burundi and Kenya had the opportunity to share their experiences in areas of common interest; especially in their action in favor of women and children. As such, the First Lady of Burundi H.E Angeline Ndayishimiye was accompanied by her counterpart from Kenya H.E Margaret Kenyatta to visit the Jaramogi Oginga Odinga hospital which hosts an innovative project of “Beyond Zero” mobile clinics to make health care more accessible to the needy, as well as the Empower project providing care adapted to women suffering from cancer. The First Lady of Burundi was also able to soak up the cultural heritage of Kisumu during the visit to the Impala Sanctuary.

For the second and last day of this State Visit, the Burundian Presidential Couple was welcomed on June 1, 2021 as Guests of Honor for the national “Madaraka Day” celebrations organized in Kisumu, Kenya's third largest city after Nairobi and Mombassa.