On Saturday 04 December 2020, the President of the Republic of Burundi His Excellency Evariste Ndayishimiye participated by videoconference in the 13th Extraordinary Session of the African Union (AU) on the African Continental Free Trade Area (AfCFTA). 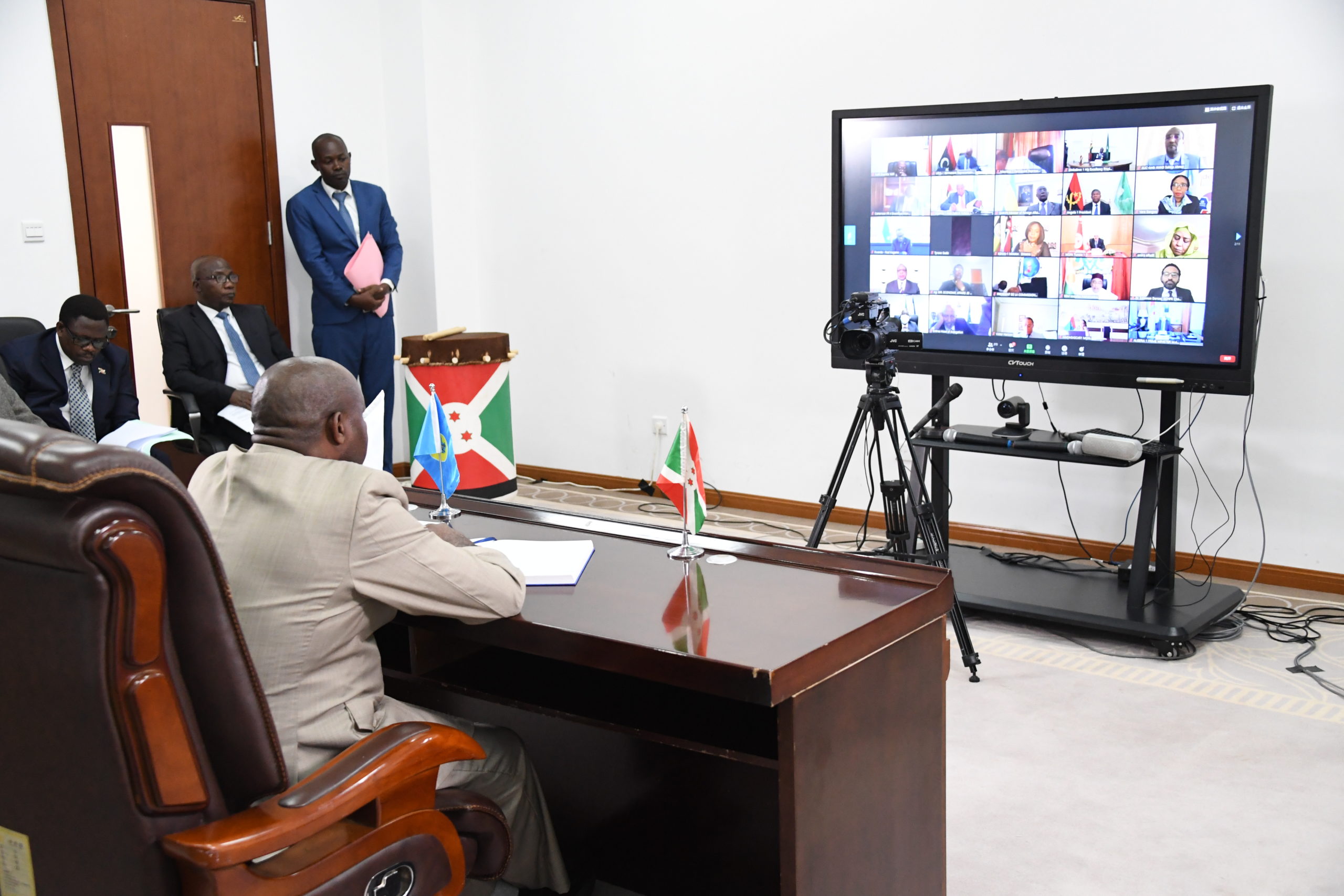 This extraordinary session, which lasted two days and in which several African Heads of States and Governments took part, was chaired in Johannesburg by His Excellency Cyril Ramaphosa, President of South Africa and the President of the African Union.

In his opening speech, His Excellency Cyril Ramaphosa welcomed the holding of this extraordinary session despite many constraints related to the Covid 19 pandemic. He praised the resilience of African countries and reaffirmed the determination of the African Continent to reinvent their economic model to improve the lives of African populations: “We have inherited a colonial economic model which does not promote real economic integration of our states. With the ZLECAf, we will revitalize trade and the strict frameworks of our borders”.

Speaking in turn, the President of the African Union Commission Moussa Faki Muhammat and the Secretary-General of the AfCFTA welcomed the support of the member countries of the AU to the project and the ambitions of the AfCFTA. . In fact, 44 African countries are signatories and 34 have already ratified the protocols for its creation. Speaking during the closed session, the President of the Republic of Burundi His Excellency Evariste Ndayishimiye paid tribute to his peer initiators of the AfCFTA, which has "the potential to be a catalyst for industrial development likely to place Africa on the path of exporting its products while improving competitiveness both in its own markets and globally."

The Head of State recalled that Africa is the largest commercial space in the world, with around 1.3 billion people. The AfCFTA therefore represents a real opportunity to stimulate the continent’s economic growth, reduce poverty and strengthen economic integration in Africa.

To overcome the major problem posed by the protectionism of certain world markets which exclude African products, His Excellency Evariste Ndayishimiye advocates the pride of producing African and African consuming and of considering above all Africa as an internal market for Africans:

“To succeed, there is a challenge to overcome. The lack of pride in consuming our African products clearly justifies the continued dependence of Africa on foreign economies and it is only by coming together that we can reverse this trend".

In concluding his speech, the Burundian Head of State reiterated Burundi's commitment to do everything possible to complete the ratification process of the Agreement establishing the AfCFTA as soon as possible and to participate fully alongside other countries to its effective implementation for the well-being of the peoples of Africa.

While the effective start of trade within the framework of the AfCFTA is scheduled for January 1, 2021, all the speakers during this extraordinary session underlined the urgency and the need to silence the guns everywhere in Africa so that the ambitions of AfCFTA can be achieved. It is around this important theme that the Heads of State and Government of the African Union agreed to meet on December 6, 2020.