Burundi celebrated the International Women's Day in Gitega, the political capital, on Monday, March 09, 2020, which is normally celebrated on March 08, 2020. This year's theme was "Stand Up for Women's Rights." In Burundi, the day was celebrated under the theme: "Let us all stand up for the achievement of women's rights ».

The ceremonies took place at the Ingoma Stadium in Gitega and were enhanced by the presence of the presidential couple, the President of the Senate and his wife, the country's top dignitaries, the high command in the Defence and Security forces corps as well as International Organizations working to defend women's rights.

The Executive Secretary of the National Women's Forum (FNF), Dr Janvière Ndirahisha thanked the President of the Republic for the step taken in promoting women's rights and asked him that in the top 3 positions, a woman should be included because women have the capacity to fill these positions.

The Resident Representative of the United Nations System in Burundi Mr. Garry Conille said that this year's celebration comes with a special stamp of so much more the Secretary General of the United Nations Mr. Antonio Guterres has indicated that the inequality between is the most egregious injustice of our time, the greatest human rights challenge and a question of power.

He deplored that women are still "very often deprived of voices, their opinions ignored and their experience sidelined," including in peace processes or health planning.

Speaking, the President of the Republic His Excellency Pierre Nkurunziza first responded to the request that women be included in the 3 senior posi

tions. In this regard, the Head of State said that women must assert themselves and campaign in political parties to show what they are capable of. "Women should not wait for cake on a gold platter," insisted His Excellency Pierre Nkurunziza. 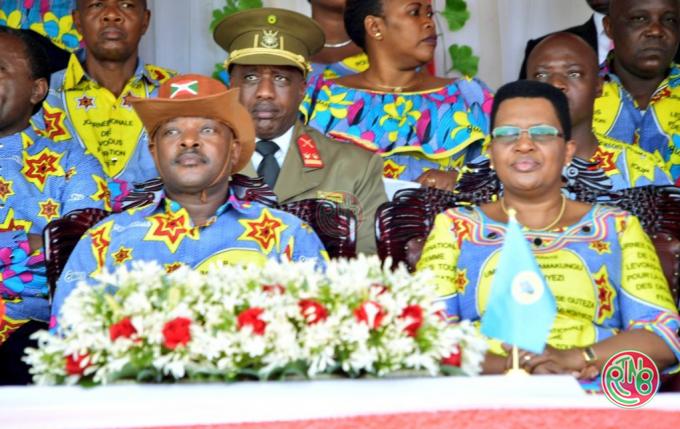 The President of the Republic subsequently gave 16 advice to Burundian women for the country to develop with the values of the ancestors. He asked women to be the epicenter of the home, to work and to look for decisionmaking positions while respecting morals and to truly show that they are up to their duties. He also asked them to join development cooperatives that would provide a space for women's development and empowerment. The Head of State also asked the spouses to support their wives in their development projects.

The President of the Republic, His Excellency Pierre Nkurunziza nevertheless deplored the behaviour of some women who misunderst the risk of one day seeing their households disintegrate.

Finally, the Head of State awarded certificates of honour to women, men and girls who have distinguished themselves in promoting gender in various fields. The Women's Forum awarded the President of the Republic a cup and a medal and to his wife, a diamond gift on which was inscribed the good works of the First Lady.